What happens when you combine three crazy sisters, 40 lbs of tomatoes, a bushel of corn, and a vacuum sealer? The Big Freeze, of course! 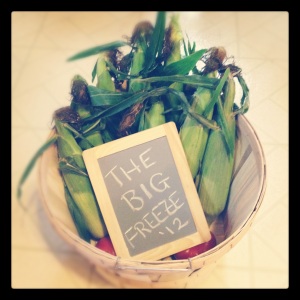 The farm we frequent in NH (also where we joined our CSA) was offering canning specials this month, for various types of produce. And, being obsessed with fresh produce AND bargain prices, we just couldn’t pass it up (20 lbs of tomatoes or a whole bushel of corn for $20?? What a steal!) We figured if we split it between our three houses, it would be manageable.

So Theresa and I loaded the van with tomatoes and corn (and a few baskets from our CSA for good measure, because we obviously didn’t have ENOUGH veggies), and headed back to the cottage, more than a little nervous that we got in over our heads.

At first, we were all a little hesitant to buy tomatoes to put up for the winter, because we had read a lot of articles about how you must dip the tomatoes into boiling water and then peel them, yadda yadda yadda. But my mother told me she used to puree tomatoes with the skins on all the time, and her tomato sauce was always delicious. Granted, if you are a fan of very smooth tomato sauce, you probably don’t want to skip that step. But we always preferred a slightly chunky sauce, so we settled for just seeding the tomatoes and leaving the skins on. (I know there are a lot of purists out there that will probably be horrified by this… and to those people I say: you are not invited to dinner. Love, Kate).

In order to motivate ourselves to actually freeze this stuff, we did what we always do: turn it into a party! And so, The Big Freeze was born. Thanks to my trusty food processor, (and my trusty little sister) it actually went pretty quickly. Janine is getting ready for her little one to arrive in a couple of weeks (yay!), so we took care of her share of the veggies while we were at it.

Here is the final tally after two nights of chopping, pureeing, and vacuum sealing:

Number of fingers punctured: 1
(“See I TOLD you my knife was sharper than your knife!”)

Number of Prosecco bottles exploded all over my kitchen: 1
(I’m not going to tell you the number of wine bottles emptied throughout the event. Let’s just say it’s impressive more fingers weren’t punctured in the making of this blog post;)

Number of caterpillars found in the box of corn: 3
(this resulted in Theresa jumping three feet in the air and running in circles around the kitchen)

Number of tomatoes that Hannah swiped from the pile to chomp on: 2 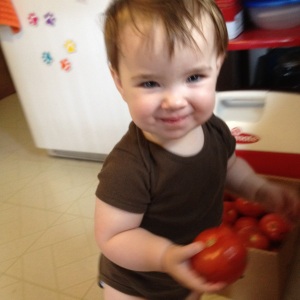 Number of times Theresa complained about how wrinkly her hands were from chopping tomatoes: 837

Number of obscene jokes made about shucking: … we lost count ;)

Ridiculous? Yes. Isnt it always? But it will be totally worth it when we’re eating delicious tomato sauce and corn chowder this winter! You can be jealous. We don’t mind.